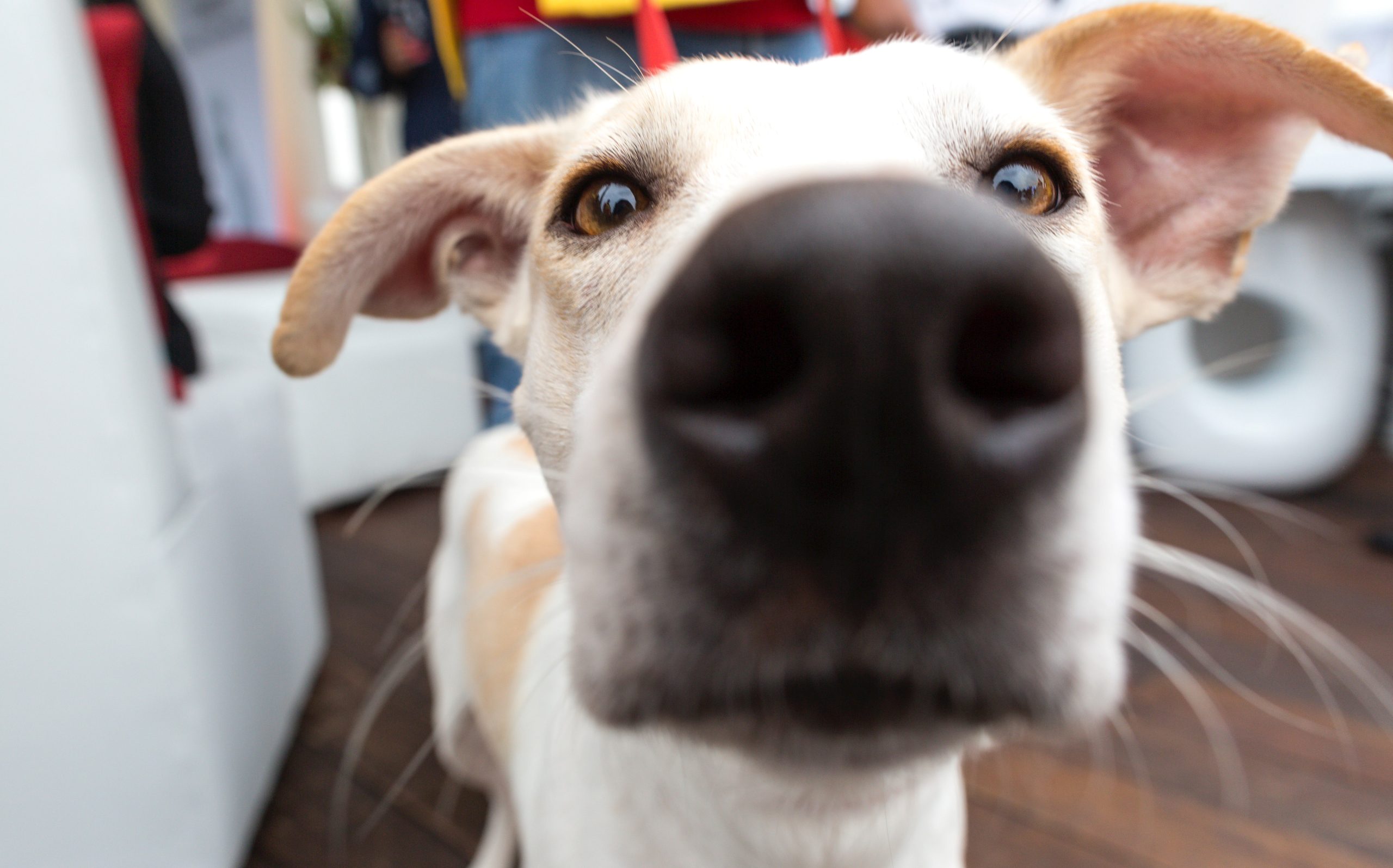 The most powerful sense our canines possess is the ability to smell.

A dog’s nose is its greatest sense; vastly overpowering our own human ones.

It’s their foremost way of building pictures of the world in their head, and they use it for a wide variety of reasons; from identifying their masters, to smelling danger even to decoding messages left in pee!

So, let’s take a look into how this fascinating sense works for our canine companions as we find out the capacity these tremendous sniffers possess.

10 Interesting Facts About Our Dog’s Noses

The sense of smell is our pup’s most powerful sense by far.

Olfactory receptors are what allow creatures to detect airborne molecules. Once activated, they send an impulse to the brain which tells what we’re smelling.

Us humans have 6 million of these receptors. Not bad eh?

Not quite. Our canine companions have a whopping 300 million of these!

And that’s not all.

The part of the brain that interprets these receptors is roughly 40 times larger than our own.

While it’s hard for scientists to give an exact figure, they believe a dog’s sense of smell to be 10,000-100,000 times greater than our own.

2/ Their Nose is Built Different

One fascinating function of a dog’s nose is its ability to separate the air it breathes.

One section focuses on breathing while the other section can recognise different scents.

They also possess the uncanny ability to breathe in and out at the same time. Their noses are designed so that air can move in and out simultaneously, harnessing a constant circulation of air.

3/ Their Nose Unlocks The Secrets of Pee

We’ve all experienced those walks down the park where you shuffle from tree to tree as your pooch has a sniff and pee. Most of us probably just assume it’s because our dogs like the scent and leave it in kind…

But there’s a lot more to it than that.

Dogs leave their scent in urine – when sniffed, your dog actually gains access to a lot of information about the perpetrator of the crime, such as:

So, the next time you’re out walking, give your friend the chance to catch up with their correspondence!

4/ They Can Smell Our Emotions

Studies show that dogs can detect feelings of sadness, anxiety, and fear from us humans through scent.

When we undergo a change in emotion, our dogs can smell the change in our hormones and body chemicals: allowing them to notice these mood swings.

For example, when we’re fearful, our body goes into flight or fight mode and adrenaline kicks in, our dogs will notice that through the smell it gives off as it excretes.

5/ They Recognise Us by Our Scent

I hate to be the bearer of bad news… but no matter how hygienic we think we are – to our dogs, we stink!

A delightful combination of our armpits, breath, and genitals combined with the fact that we’re constantly excreting from our skin means that to our dogs we each have our own signature scent!

You may have noticed that wearing a mask throughout Covid elicited next to no response from your furry friend; let’s just say there’s few disguises that’ll fool your perky pal.

Dogs have the ability to take in different smells through separate nostrils.

By doing this they can form a 3D picture in their brain to find where the source of the smell is.

The next time you bring your pooch to the park, watch how they use their nose to guide them along their way – they’re building up a map in their head from the urine left by their buddies!

7/ They Smell Better When Their Nose is Wet

The reason why dogs often have damp noses is that they’re better suited for catching hold of smells.

This is because scent particles attach to damp surfaces easier than dry ones.

Another benefit of wet noses is that they help regulate our doggy’s temperature. They’re used as a way of dissipating excess heat for our mates.

8/ They Have A Unique Organ For Smelling

The Jacobsen organ – located at the back of our canine’s nasal passage – gives our dogs yet another nasal advantage.

Because it’s a separate organ, the pheromones don’t get confused with different odors and travel to a section of the brain set aside to manage these signals.

9/ They Have Their Own Noseprint

It’s common knowledge that every human has their own unique set of fingerprints.

But did you know that the same might be the case for dogs’ noses?

Preliminary studies are indicating that the grooves and patterns on our furry friends’ noses may also be entirely unique!

Why not capture what makes your special friend unique and take their noseprint!?

Simply, dab some food colouring onto a paper towel, then gently wrap the paper around your dog’s nose, lift away, and there you have it: a memento you can keep for life.

10/ Dogs are trained to smell

Having a prodigious sense of smell has given many doggies around the world different tasks and jobs.

Here are a just a few examples:

Drugs– Dogs can detect odors at concentrations of part per trillion, so good luck hiding something in a suitcase.

Bed Bugs– Dogs can detect the presence of bed bugs and find the root of infestations.

Cancer- Specially trained dogs can detect cancer at a rate higher than computers at a whopping 88-97% accuracy!

The power of your dogs nose is truly remarkable.

It’s their way of viewing the world, so keep an eye out for how much they use it in their day-to-day life!

That rounds up this week’s BusterBox blog. Keep your eyes peeled for more fun, informative posts and next weeks “Why BusterBox” guide, giving you an in-depth analysis into why we’re the best dog subscription box out there!

And as always, be sure to check out our BusterBox goodies and show your dog how much you care. 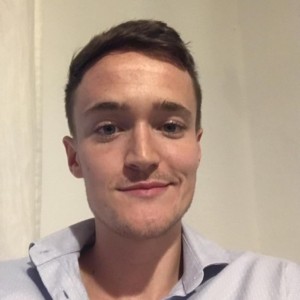 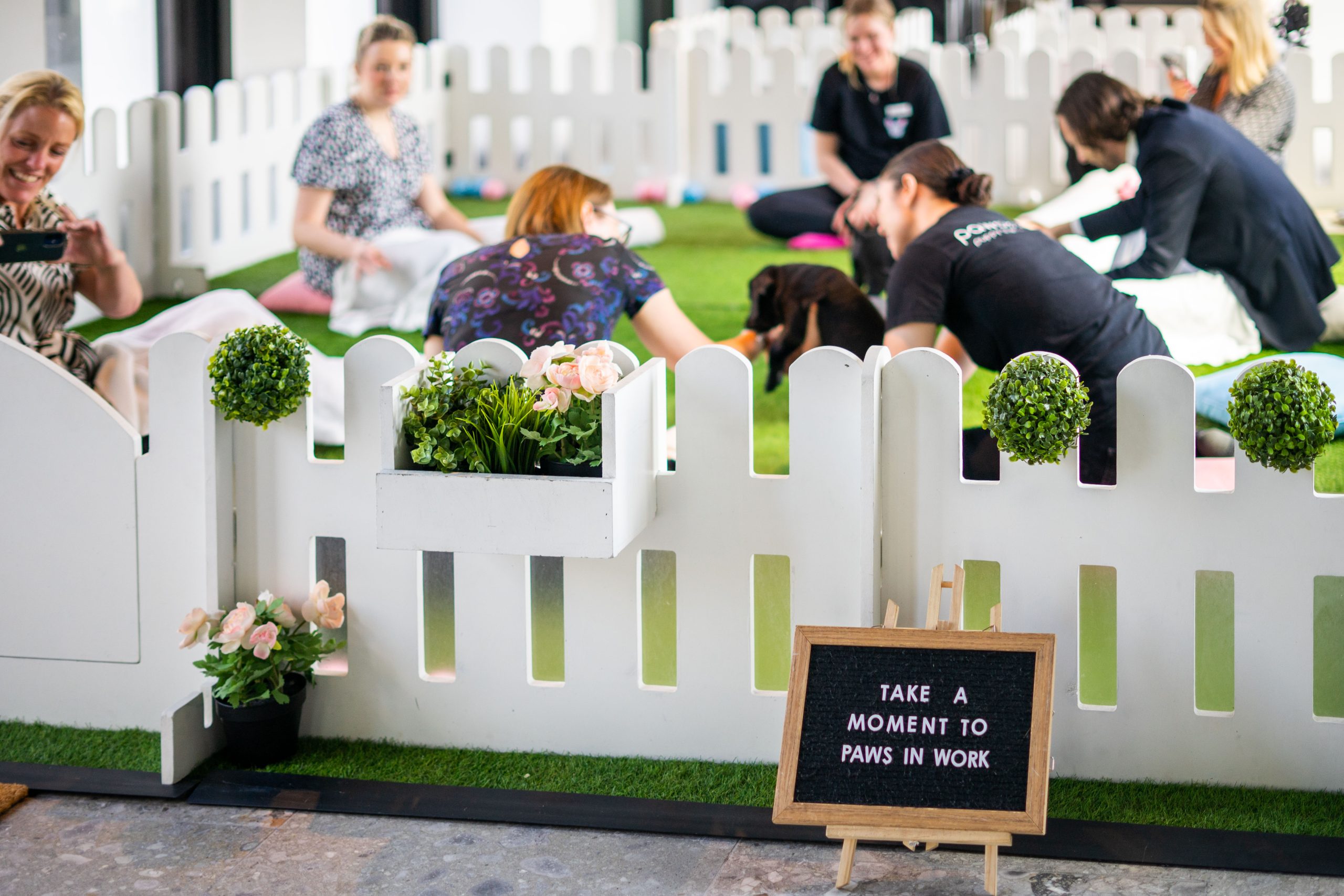 Paws In Work: Everything You Need To Know 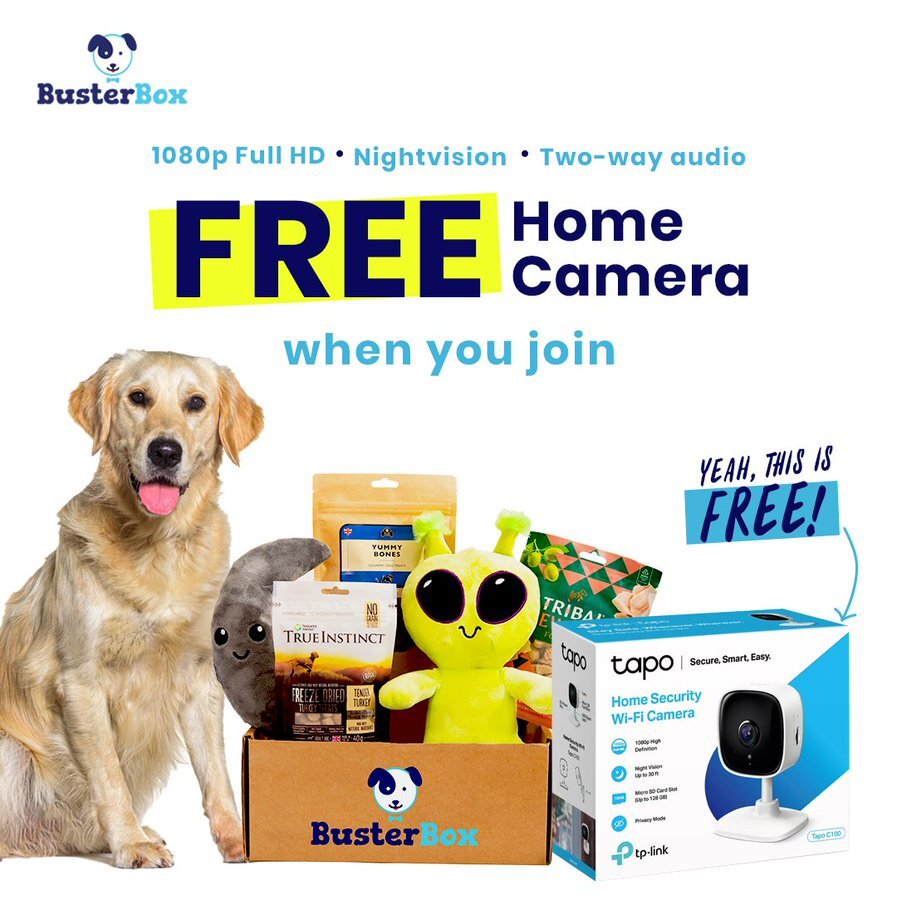 Leaving Your Dog Home Alone: Everything You Need To Know 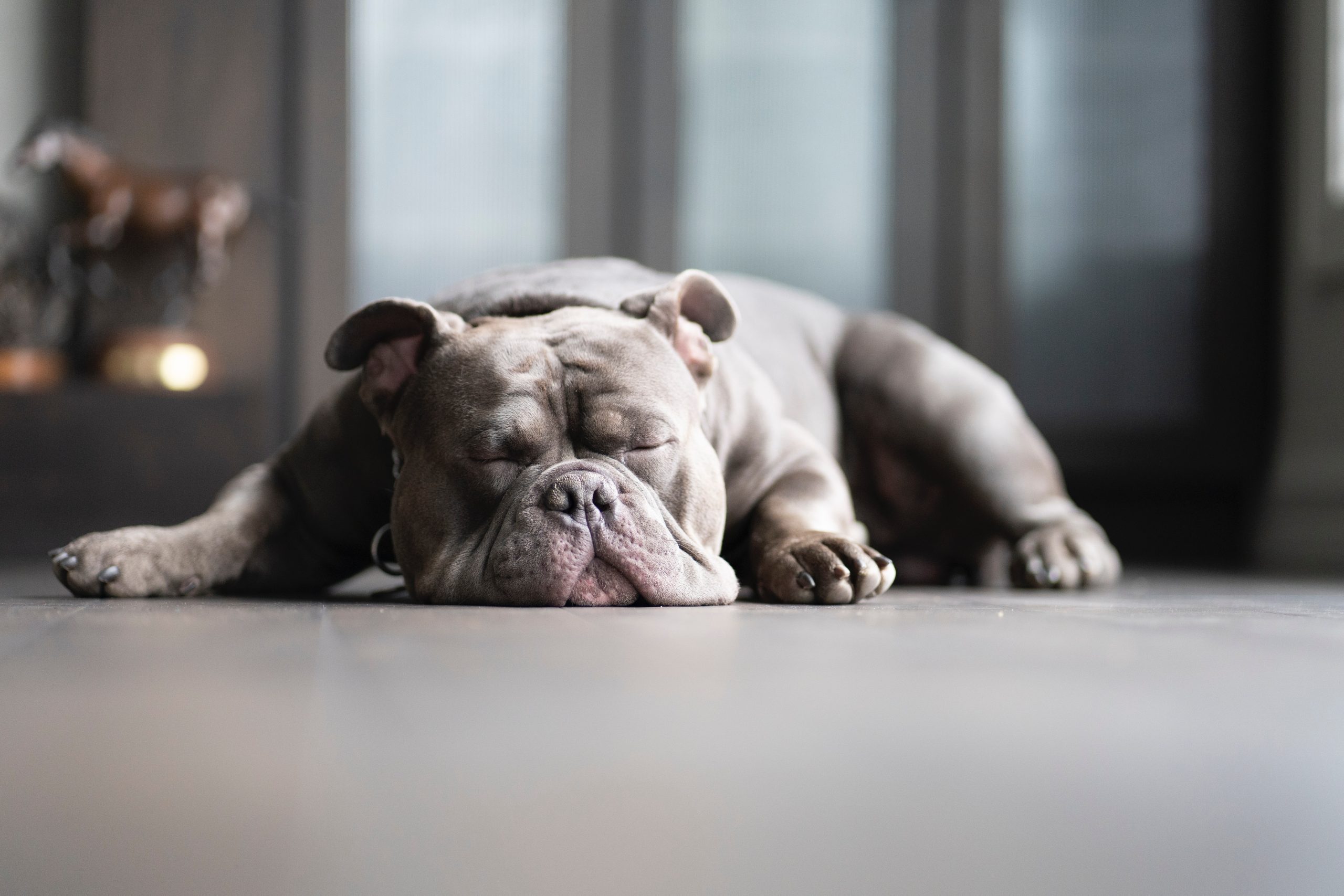 What Do Dogs Dream About? Everything You Need To Know 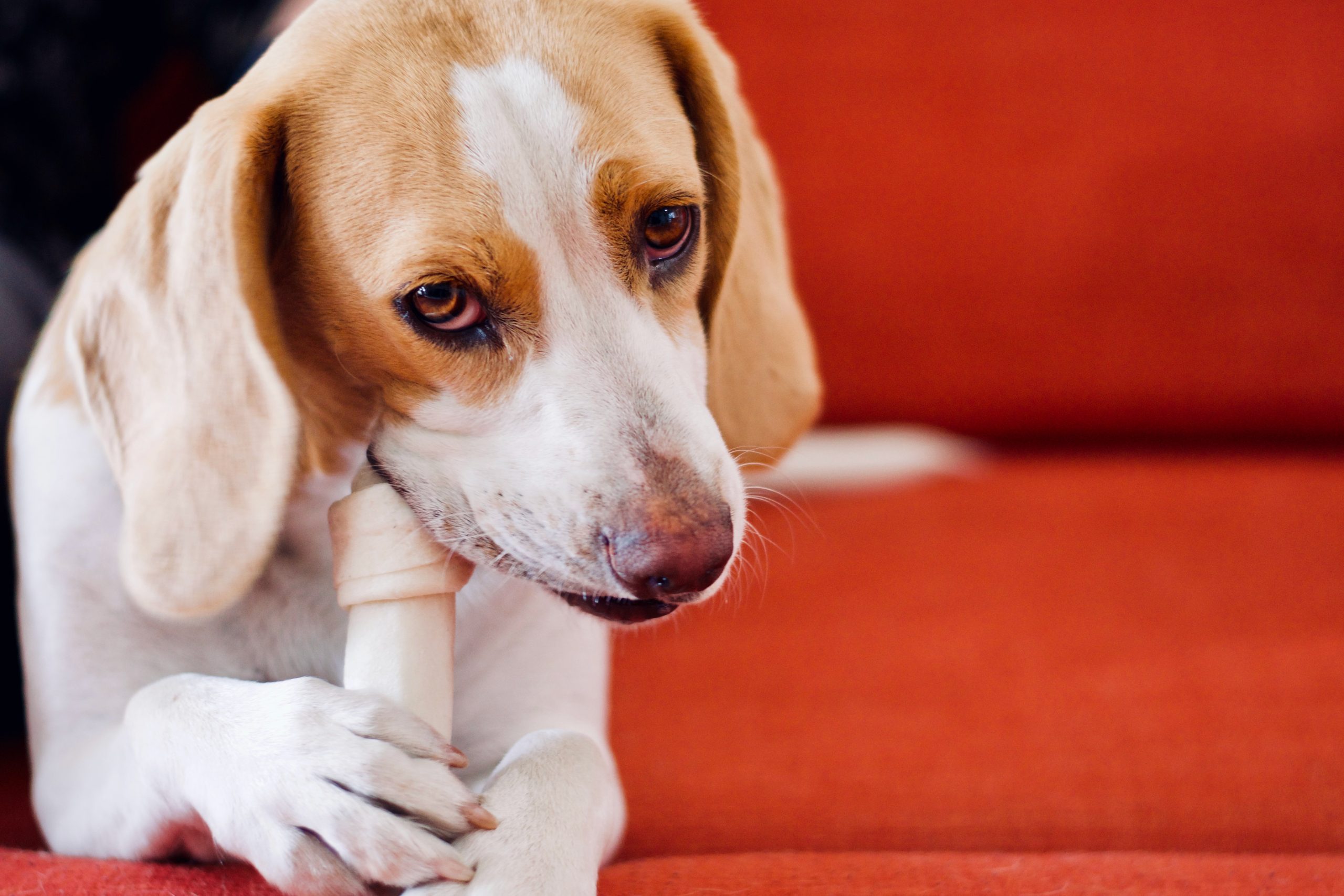 Should Your Dog Be Eating Bones?

Gavin Mulligan September 14, 2022
PrevPreviousHelp! My Dog is Eating Grass: 4 Reasons Why This Can Happen
NextYour Guide To BusterBox: How It Works, What To Expect, Why It’s Worth ItNext